None of those things, of course. In fact, one might well suppose that the popular feeling is that Americans are a lot better off without any of that tripe.

There is a cult of ignorance in the United States, and there always has been. The strain of anti-intellectualism has been a constant thread winding its way throughout political and cultural life, nurtured by the false notion that democracy means that “my ignorance is just as good as your knowledge.”

Politicians have routinely striven to speak the language of Shakespeare and Milton as ungrammaticaly as possible in order to avoid offending their audiences by appearing to have gone to school. Thus, Adlai Stevenson, who incautiously allowed intelligence and learning and wit to peep out of his speeches, found the American people flocking to a Presidential candidate who invented a version of the English language that was all his own and that has been the despair of satirists ever since.

George Wallace, in his speeches, had, as one of his prime targets, the “pointy-headed professor,” and with what a roar of approval that phrase was always greeted by his pointy-headed audience.

Buzzwords: Now we have a new slogan on the part of the obscurantists: “Don’t trust the experts!” Ten years ago, it was “Don’t trust anyone over 30.” But the shouters of that slogan found that the inevitable alchemy of the calendar converted them to the untrustworthyness of the over-30s, and, apparently, they determined never to make that mistake again. “Don’t trust the experts!” is absolutely safe. Nothing, neither the passing of time nor exposure to information, will convert these shouters to experts in any subject that might conceivably be useful.

We have a new buzzword, too, for anyone who admires competence, knowledge, learning and skill, and who whishes to spread it around. People like that are called “elitists”. That’s the funniest buzzword ever invented because people who are not members of the intellectual elite don’t know what an “elitist” is, or how to pronounce the word. As soon as someone shouts “elitist” it becomes clear that he or she is a closet elitist who is feeling guilty about having gone to school.

Very good, I’m for that too. But how are you going to let people know all that?

Grant us a free press, and a corps of independent and fearless investigative reporters, comes the cry, and we can be sure the people will know.

Yes, provided they can read!

As it happens, reading is one of those elitist subjects I have been talking about, and the American public, by and large, in their distrust of experts and in their contempt for pointy-headed professors, can’t read and don’t read.

To be sure, the average American can sign his name more or less legibly, and can make out the sports headlines – but how many nonelitist Americans can, without undue difficulty, read as many as a thousand consecutive words of small print, some of which may be trisyllabic?

Moreover, the situation is growing worse. Reading scores in the schools decline steadily. The highway signs, which used to represent elementary misreading lessons (“Go Slo”, “Xroad”) are steadily being replaced by little pictures to make them internationally legible and incidentally to help those who know how to drive a car but, not being pointy-headed professors, can’t read.

Again, in television commercials, there are frequent printed messages. Well, keep your eyes on them and you’ll find out that no advertiser ever believes that anyone but an occasional elitist can read that print. To ensure that more than this mandarin minority gets the message, every word of it is spoken out loud by the announcer.

Honest effort: If that is so, then how have Americans got the right to know? Grant that there are certain publications that make an honest effort to tell the public what they should know, but ask yourselves how many actually read them.

There are 200 million Americans who have inhabited schoolrooms at some time in their lives and who will admit that they know how to read (provided you promise not to use their names and shame them before their neighbors), but most decent periodicals believe they are doing amazingly well if they have circulations of half a million. It may be that only 1 per cent–or less–of Americans make a stab at exercising their right to know. And if they try to do anything on that basis they are quite likely to be accused of being elitists.

I contend that the slogan “America’s right to know” is a meaningless one when we have an ignorant population, and that the function of a free press is virtually zero when hardly anyone can read.

What shall we do about it?

We might begin by asking ourselves whether ignorance is so wonderful after all, and whether it makes sense to denounce “elitism”.

I believe that every human being with a physically normal brain can learn a great deal and can be surprisingly intellectual. I believe that what we badly need is social approval of learning and social rewards for learning.

We can all be members of the intellectual elite and then, and only then, will a phrase like “America’s right to know” and indeed any true concept of democracy, have any meaning.

Asimov, a professor of biochemistry at Boston University School of Medicine, is the author of 212 books, most of them on various scientific subjects for the general public. 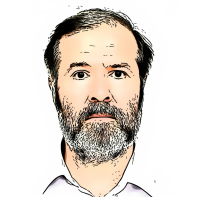